Cricket is one sport that totally unites a nation and its people in the spirit of the game. The spirit of the game is a binding force and so is the jersey worn by the team representing the country or team. Which brings us to understand the importance of a custom cricket clothing- apart from uniting the whole team in the essence of the game, it is also like an identity for the team to be recognized and followed. Cricket has set many universal trends that people still follow religiously, especially the style quotient of your favorite team or its players. How many of us cannot identify Malinga, the Sri Lankan bowler? Well, thanks to his hair, which serves as his style statement. Even the Afghanistan Cricket Team, which might be comparatively new in the scenario can be identified easily, all thanks to their exclusive and attractive jersey. 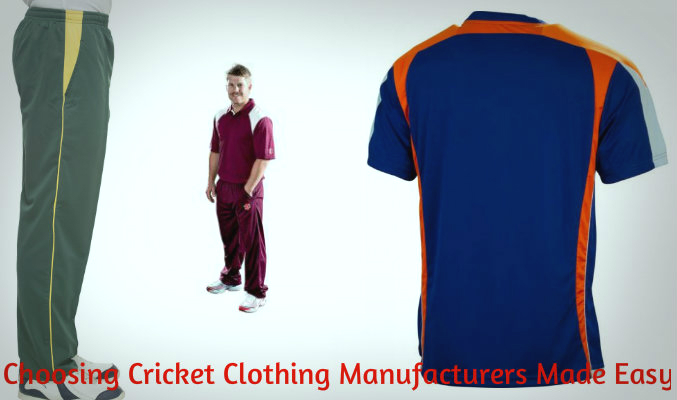 Cricket clothing manufacturers should to be one who can provide a team with an exclusive design that will make the team stand out from a pool of other teams and also unites the team members with the motto of the team. And not to forget that they can make possible any alterations and exclusivity in the designs. Usually, the traditional cricket jerseys are white in color because cricket was known as a gentleman’s game! Also, it was a uniform because the Lords of England used to wear white tracks and since then, it has been passed on from generation to generations in all cricket players to wear white!

A cricket jersey should be made of moisture wicking material to keep the body feeling fresh and sweat free. Also, moisture tends to weigh down the body, especially with cotton materials, which affects the performance of the player and also making them feel uncomfortable. So, it’s best to stick to sweat absorbing materials which are stretchy and give enough space and freedom for movement. That way, movement will neither be restricted and performance on field will be at its best! A good cricket jersey can really accelerate performance on your ‘the’ day!

So, the next time, choose your cricket clothing manufacturer carefully!